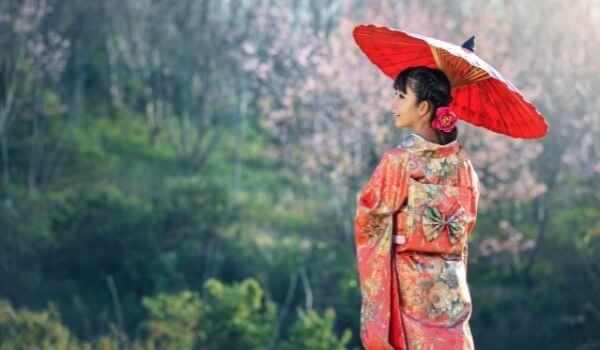 Japanese last names are quite different from the American system. The family name is usually written first and many Japanese have only one name, which is their given or real first name. A person’s surname can come from a number of sources: their father’s given name, the posthumous honorific title of a parent, a personal achievement such as becoming a doctor or lawyer after passing an exam, or from the designated area where they were born. In some cases, people may have two surnames if they marry into another family and take on that last name as well. Read on to learn more about how these work in Japan!

First, let’s clarify one special word that you will find quite often throughout this article:

Kanji: the adopted Chinese characters used to write Japanese words. Basically, the words that you will see written in the original language.

Oka/Okada (おか): Many people in Japan have surnames ending with “oka” or “okada”. This is because there are many different family names ending with these two syllables. For example, among the fifty most popular Japanese last names, 46 end with either of the two syllables. The other four names are Taka/Takeda (たか), Matsu/Matsuda (まつ), Shi/Shimizu (し), and Za/Zard (ざあ).

Ogawa/Okamoto (おがわ): This is a common last name in Japan. Many people with this surname four last names ending with “oka” or “okada” can be explained as follows:

The name Okita (沖田), when read as ‘oh-kee-tah’ with one long final high tone, can be interpreted as ‘the place over the river’ or the river itself.

Murakami/Muramatsu (むらかみ): This is another very popular Japanese surname, especially in the Kansai region of Japan. It comes from the posthumous honorific title oft he Emperor Murakami (村上天皇).

Sasaki (佐々): There are several explanations for this last name. The kanji used to write this surname can mean ‘assist’ or ‘mix/blend’. It also means ‘rice plant’. When read as ‘sah’-kah-shee’, it is similar to the word for person, so it could be interpreted as ‘born to assist people’.

Takahashi (高橋): One possible explanation is that these kanji can mean ‘high bridge’. This surname is the most popular one in Fukui prefecture. It can also mean ‘great river’ and when read as tah-kah-hah’-shee, it becomes the word for ‘great’.

Tonari (となり): This can be read as ‘to-nah’-ree’, which is similar to the word for person, but also means ‘next door’.

Sakamoto (坂本): This surname is written with the same kanji as the word for ‘slope, hill, or mountain’. When read as ‘sah-kah’-moh-toh’, it means ‘next to the slope/hill/mountain’.

Kawamura (川村): This surname is made up of two kanji which both mean ‘river’.

Nakamura (中村): This last name is the Japanese version of the Chinese surname Zhao and thus has a few explanations to its meaning. The kanji used here means ‘middle’ or ‘in’. When read as ‘nah-kah’-moo-rah’, it also incorporates the word for person. So it could be explained as ‘in the middle of people’.

Nakadai (中台): The kanji used here means ‘middle’ or ‘in’. When read as nah-kah’-dah-ee, it also incorporates the word for person. So it could be interpreted as ‘born in the midst of people’.

Hasegawa (長谷川): This shows the meaning of the word ‘river’ and has a pronunciation similar to that of the word for person. So it could be interpreted as the ‘river among people’.

Kobayashi (小林): It is read as ‘koh’-bah’-yah’-shee’, mean ‘small forest’ or ‘small beans’. It is a popular name in Fukui prefecture.

Ikegami (池上): The kanji used here mean ‘pond’ and ‘above’. When read as “ee-keh’-gah-mee”, it could be interpreted as ‘born over a pond’ or ‘living above a pond’.

Nakai (仲井): The kanji used to be read as ‘nah’-kyah’, meaning ‘inside’ or ‘at the back of…’. This last name is mostly famous in Tottori prefecture.

Miura (三浦): It represents ‘three’ and ‘distant’. When read as ‘mee’-oo-rah’ and combined with the word for person, this last name can mean ‘between three people’.

Fukui (福井): The kanji embody the meaning of ‘blessing’ or ‘fortune’. When read as ‘foo-koo’-ee’, it means ‘next to the blessing/fortune’.

Shimizu (清水): Should be read as ‘shee-mee’-zoo’, it means ‘next to the pure water’ or ‘at the base of the waterfall’.

Kimura (木村): This surname takes meaning from ‘tree’ and ‘village’. When read as ‘kee’-moo-rah’, it means ‘next to the tree’ or ‘at the base of the tree’.

Takeuchi (竹内): Stands for the words ‘bamboo’ and ‘within’. So when read as ‘tah-keh’-oo-chee’, it means ‘at the bamboo within’.

Asahina (朝比奈): It is derived from the word ‘morning’. So when read ‘asah-hee’-nah’, it means ‘next morning’.

Nishimura (西村): Means ‘west’ and ‘village’. When read as ‘nee-shee’-moo-rah’, it means ‘born in/at the west of the village’.

Sasaki (佐々木): Stands for ‘rice paddy’ or ‘vassal’. Should be read ‘assah’-sah-kee’, meaning ‘at the side of the rice paddies/at the base of the vassals’.

Kawaguchi (川口): This last name is made up of the kanji for ‘river mouth’ and ‘side’. So it can be read as ‘kah-wah’-goo-chee’, which means ‘at the side of the river palm/inlet’.

Yokomizo (横溝): It shows the meaning of the words ‘side’ and ‘brook’. When read ‘yoh-koh’-mee-zoh’, it means ‘at the side of the brook/rivulet’.

Horii (堀井): This last name is made up of the kanji for ‘cave’ and ‘ditch’. It can be read as ‘ho-ree’, which means ‘at the base of the cave/gorge’.

Takemoto (竹本): The kanji assume the role of the words ‘bamboo’ and ‘origin’. Should be read as ‘tah-keh’-moh-toh’, meaning ‘born at the base of the bamboo/rice paddies’.

Shibuya (渋谷): These kanji signify ‘soft’ and ‘mountain/hill’. So when read ‘shib-oo’-yah’, it means ‘at the base of the mountain/hill which is soft’.

Mochizuki (望月): Means ‘full moon’ and ‘fate’. Should be read as ‘moh-chee’-zoo-kee’, meaning ‘born in the moonlight/at the time of the full moon’.

As you can see just from their last names, the Japanese are quite interesting people. Now that you are more familiar with their surnames, you can start or continue your journey towards better understanding Japanese culture.